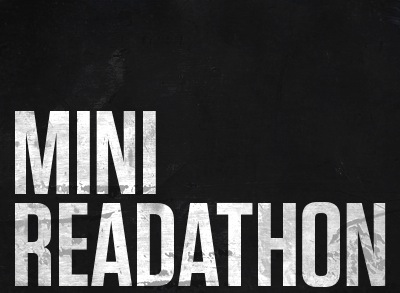 WELCOME TO 8AM, my lovelies. Actually you're in the future; it's 12:39am as of this writing and I've been staying up FAR too late drinking (according to Minithon tradition), although this time I have a valid excuse as my German cousins are in town and there was a Gathering.

If I'm late to the Twitter, it's because I'm currently typing this with one eye firmly held shut. Rest assured I will arrive shortly with a silo of coffee and many apologies.

SNACKS! I went to Trader Joe's (bless) and picked up a multitude of mini-foods, which I fully intend to consume later:

And my reading plan is to drink a shitload of coffee, then finish the audiobook of Gaskell's Wives & Daughters (of which I have less than a chapter left - a miniature amount), then to dive into the audiobook of The Hobbit (hobbits! Dwarves! They're all small and I am generally more appropriate and sensitive I swear). I've got some mid-grade children's books (mini-people!) for if I want to turn actual pages.

Turning actual pages takes effort, you guys. Minithons are not about effort, they are about indulgence and excuses reasons to eat and read whatever we want. Just put the literature in my ear holes and let's have no more about it. I turned down Queen Croissants because they have to proof overnight.

What are your plans? Link them below!
(We've got some newcomers this time around, and welcome! Usually we'll link our initial Minithon posts, then edit that post with an update at the end and point it out in the comments below.)

And now if you'll excuse me, it's 1:01am and there is a pillow that needs to meet my face.

Darlings, it is (nearly) finished. We started off beautifully and late (thank you all for not calling me at 8am) and then we dicked around on Twitter for awhile like usual and I read all your posts and then I settled down to the last 21 minutes of Gaskell's Wives & Daughters which is one of my absolute favorites but was cut one chapter short by Mrs. Gaskell's literally and literarily untimely death. Listening to the final chapter is always hard for me, because Mrs. Gibson does go on and on and I wish she wouldn't quite so much so that the story could have an ending instead. But of course that's not how things actually work, and I'm always left with a

feeling. It's so good, though. And you should listen to the audiobook because it is narrated by Prunella Scales of Fawlty Towers fame and she is an utterly delightful narrator.

Then I started the audiobook of The Hobbit and I am very close to 2 hours in, which means I did the actual activity of reading for more than 25% of the Minithon, which is a personal best! Go me!


I also ate half of the puff pastries, all of the chicken pot pie bites (super-delicious), and am about to reward myself with a mini-ice cream cone and then probably continue to listen to The Hobbit and knit for the rest of the day because I can and not because there's some rule telling me I should.

Minithons are the best, even when we have to share a hashtag with some sorority doing weird face-painting stuff for no discernible reason.

So, tell me! How did you fare? Upon what did you snack? WHEN DO WE DO THIS AGAIN? (I'm thinking April.)


Mister Linky's Magical Widgets -- Auto-Linky widget will appear right here!
This preview will disappear when the widget is displayed on your site.
If this widget does not appear, click here to display it.
Posted by Unknown at 7:30 AM

Email ThisBlogThis!Share to TwitterShare to FacebookShare to Pinterest
Labels: all the snacks, book blogging is not necessarily about actual reading, hell yes minithon, read-a-thong
It Is Time!
2014-11-22T07:30:00-08:00
Unknown
all the snacks|book blogging is not necessarily about actual reading|hell yes minithon|read-a-thong|
Newer Post Older Post Home
Subscribe to: Post Comments (Atom)