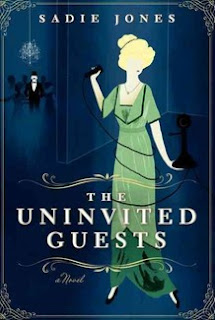 Soooooo this post has sat open on my Chrome desktop for literally a week [not a figurative week, you understand. An actual week, according to my Remember the Milk reminder (shameless plug - I love that app!)]. Just sitting there in my tabs, an empty post with the exception of the cover up there *points up*.

It's not because this book was bad; on the contrary, it was really quite good. It's not because I can't think of anything to say; I've got about 300 things I could mention, but decorum and modesty (read: a hatred of spoilers) forbids it. It *may* have to do with what appears to be my need to ruminate on books after I've read them, which doesn't mesh well with my tendency to prioritize my TBR pile by what's already overdue at the library.

Back to the story! It's Edwardian England, and this does not appear to be Sadie Jones's first authorial rodeo, based solely on the lack of sentence fragments in her book.

Ok for real. It is Emerald Torrington's birthday, and there is going to be a party! But then the house gets word via the newfangled telephone that there's been a horrible train crash and refugees will be sent and they must take care of them. And what follows is a hugely intriguing story that I won't tell you about because of my EXTREME DELICACY. Or, you know, spoilers. But it's a bit of a combination of Wilde and Wharton with maybe a dash of King.

I particularly liked Florence, who describes tea as "the most labour-intensive and least productive substance on Earth...A feeble drink unchanged by passing through the body" (58). HAH! I love tea, but there's a reason people invented individual tea bags and the electric kettle. Pip pip, Old Bean.

Go read it! You'll like it! And if you've already read it,*


*let's have a discussion in the comments about the difference between zombies and ghosts. I have serious opinions, people.
Posted by Unknown at 5:30 AM